Thoughts and Prayers: Why the Path to Compassionate Behaviour May be More Difficult Than You Think

With the rise of social media and online connectivity in the latter half of the decade you may have noticed the phrase “thoughts and prayers” being thrown about under comment sections for news articles on Facebook, particularly when the topic of discussion is tragedy such as a natural disaster, school shooting or terrorist attack. This phrase has become such a standard response from both policy makers and private citizens when hardships occur that it arguably has zero value. Indeed, research has shown that while Christians may value prayers, those who are atheist and agnostic were averse to thoughts and prayers and would even pay for someone not to pray for them. With the lack of value, and ease of giving the phrase “thoughts and prayers” it can be suggested that it does not come under compassion, which when examining the definition, critically requires a commitment to alleviate or prevent suffering. Indeed, compassionate behaviour is more difficult and comes less automatically than we would hope to think. This is particularly relevant when it comes to the provision of humanitarian aid where the beneficiary is often someone from our outgroup. As such, the utilisation of Loewenstein and Small’s (2007) Scarecrow and the Tinman model of emotional versus rational compassion can provide further insight into why we might simply offer “thoughts and prayers” to an outgroup as opposed to taking that difficult compassionate behaviour response. 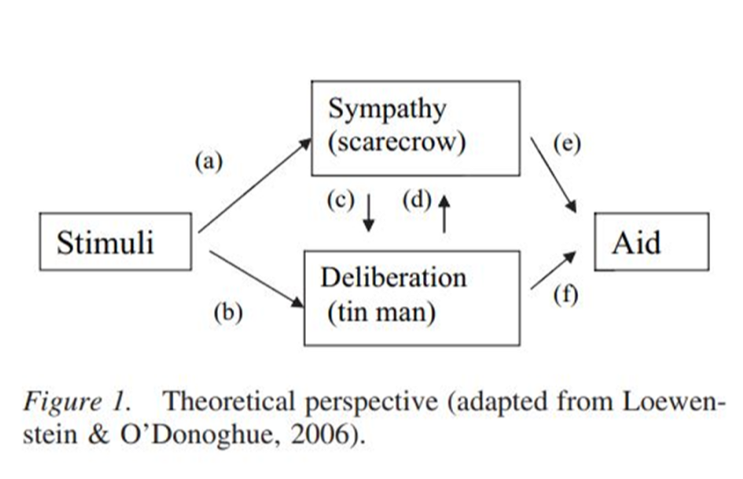 As figure 1 indicates, for path A we encounter a stimulus, such as someone affected by a natural disaster, which may cause us to evoke emotion and provide immediate spontaneous aid. The other option is that we encounter a stimulus, but don’t have the emotional response, but other factors such as morality or ethics weigh into the situation, and we then make a deliberation about whether to give aid or not. However, for path A it is dependent on us having an empathic emotional response to the stimuli in order to act compassionately. One of the strongest factors that play into this is whether or not the person evoking the emotional response is from our ingroup or our outgroup. In the context of humanitarian aid, this can have massive impacts on the amount of effort given to assist relief in times of hardship.

Why is it significant?

To examine this issue, its worth looking at the difference in relief efforts for domestic versus international disasters. Till this day the 2004 boxing day tsunami in the Indian ocean remains one of the biggest natural disasters in recent memory and came at a time where a fair amount of footage was able to be recorded and uploaded online. Individuals in the U.S contributed an estimated 1.54 billion dollars to relief efforts. However, this is in comparison to an estimated 4.25 billion in relief from U.S individuals for Hurricane Katrina despite the death toll of the tsunami reaching an estimated 212,611, which was 160 times that of hurricane Katrina at around 1,300.  For a more recent example we can compare the $15 million Indonesia received for the 2018 tsunami that struck Central Sulawesi killing more than 2000 people to the 525 million red cross alone was able to raise for hurricane Harvey that struck in 2017 resulting in 107 deaths.

This massive difference may be partially explained by contrasting  compassionate behaviour for those from our ingroup compared to those perceived as belonging to an outgroup. Indeed, research in the aftermath of hurricane Katrina found that people attributed those perceived as an outgroup with less human emotions than those who were their ingroup. Furthermore, they were also less likely to volunteer their time for relief efforts when they read about a mother from a racial outgroup who had lost their son compared to when it was a mother identified from their racial ingroup.  This may be due to a phenomenon known as empathic dampening. This effect has been shown in multiple studies demonstrating that we have muted empathic responses in certain regions of our brains when viewing members from an outgroup receive pain. This may negatively influence the likelihood when viewing a tragedy that has occurred to an outgroup that we experience the scarecrow’s emotional instantaneous response to provide aid which may be in the form of donating to charity or volunteering for relief efforts.  As such, we may decide that it is simply easier to offer ‘thoughts and prayers’ under a Facebook post rather than engage in the active component of compassion, that is actively trying to alleviate suffering. However, according to the scarecrow and tinman model it is possible to engage in compassion for outgroups even if there is a failure to be moved through empathy. Although, this pathway to compassionate behaviour requires a conscious effort and the deliberate weighing up of reasons that may be based on ethical or moral ideals.

Other issues of Importance

It may also be that a lack of compassionate behaviour for outgroups affected by tragedies is driven by phenomenon known as compassion collapse. This is one’s tendency to feel and act more compassionately for single victims than for a large number of victims. Research has shown that when participants are presented with either one or a group of 8 children, willingness to contribute money was lower for groups than for individuals. As such, the high death rate in the Indonesian tsunamis outlined earlier could trigger this effect resulting in the passive response that is offering “thoughts and prayers”. Future considerations for this area could investigate whether compassion collapse is stronger for outgroups than ingroups.

The pathway to compassionate behaviour is far more complex than we may think, as evidence has shown we are less likely to take the active engagement compassionate behaviour requires when perceiving suffering of those in an outgroup. Instead, it seems far easier to simply offer “thoughts and prayers” online as an attempt to make ourselves feel better when witnessing the immense amount of suffering involved in tragedies. It may also be that we experience compassion collapse when witnessing outgroups suffer, feeling helpless in the face of so many affected.  However, compassion-focused meditation is an example of an explicit generation of compassion which could assist in extending compassion from the self to encompass all of humanity, thereby overcoming ingroup versus outgroup barriers to compassionate behaviour.

2018 Indonesia quakes and tsunamis: Facts, FAQs, and how to help | World Vision. (2019). Retrieved 20 September 2019, from https://www.worldvision.org/disaster-relief-news-stories/2018-indonesia-earthquake-facts